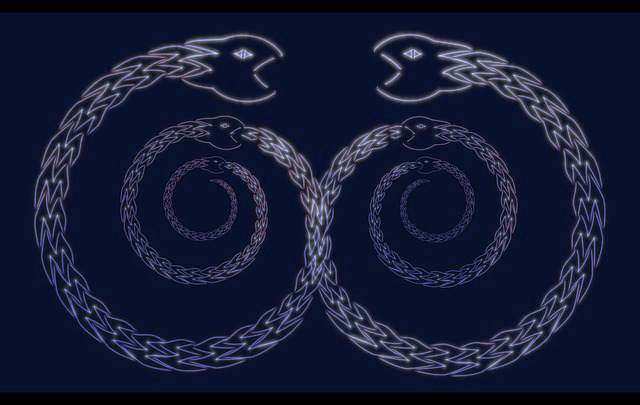 The phrase, “there is nothing new under the sun” seems to fit well with this theory.  Also, the idea of “lost knowledge”, that which had been known before, that will be known again.

The divine incarnation, Jesus (and possibly others), may also follow this cycle; bringing this great work to completion by being born again.  Possibly coming again under a different flavor; the same thing, yet slightly different; a full Krishna, a man with cosmic consciousness.  Possibly also, from Mind to material, back to Mind.  The mind of the Father, becoming the mind of the Son, through infinite expressions and variations of being(s).  A simulation, concrete and tangible, to a complete breakdown of all rules, possibly through the magic of the divine.  The infinitely complex puzzle that has been thrown out into matter and scattered, magically becomes whole again.  The truth become lies to become truth again; the lies being subjective experience.  It is a stirring up, a muddying of the waters in order to bring to the surface that substrate that came before.  God is truth, and we are all on an epic journey back to truth, back to God; a cosmic boomerang, the law of attraction to all divine qualities.

There is always a natural cycle, a pattern.  The sun dies each day, gives way to night, and reoccurs in the next.  The multiverse theory, that there are infinite amounts of parallel universes, also applies to Eternal Return.  We could possibly be living in the universe that “got it right”; depending on those who reach “full enlightenment”, full incarnation of the divine; the end purpose.  Imagine a random universe, now imagine a being that comes forth who follows the spiritual path and reaches its end.  For both to exist, there must be infinite alternate universes alongside this one, not in play; God picked the right one by magic of the divine.  This however, does not exclude parallel universes if that is the natural order of things; the scientific basis. God’s nature is also of the eternal, so it follows that the universe he created is eternally recurring.  The incarnation of the divine, the eternal, is when that snake finally comes around, swallows its own tail, and brings this work to completion.  Souls cast into the simulation; has God spared us from infinite lives?  Is this the universe that got it right?  Are we living our best lives that we could have possibly lived, despite our suffering?  I believe there is a reason why God chose this one.  A “Jesus” has already come forth, and so will the Second Son.  We are entering the age of Mind, and we are very close to bringing forth that being that uses Mind to master matter; a complete recurrence of that great Cosmic Mind into a slightly smaller version, a human perhaps.

All things that were, shall be again.  That cosmic wheel is spinning irregardless of time.  This is it; this is the one out of infinity; make it count.  Each possible action is spinning into wound up worlds; all possible have nots. That great spell of being doomed to live infinite lives, trapped in that dream, has been broken, by the power of the real.  How many lives did it take to finally find the one that has meaning?  Did God test all possible outcomes of the universe until He finally found His plan; until He finally found the one that satisfies the divine?  Live your best life, and contribute to the one that finally has meaning.